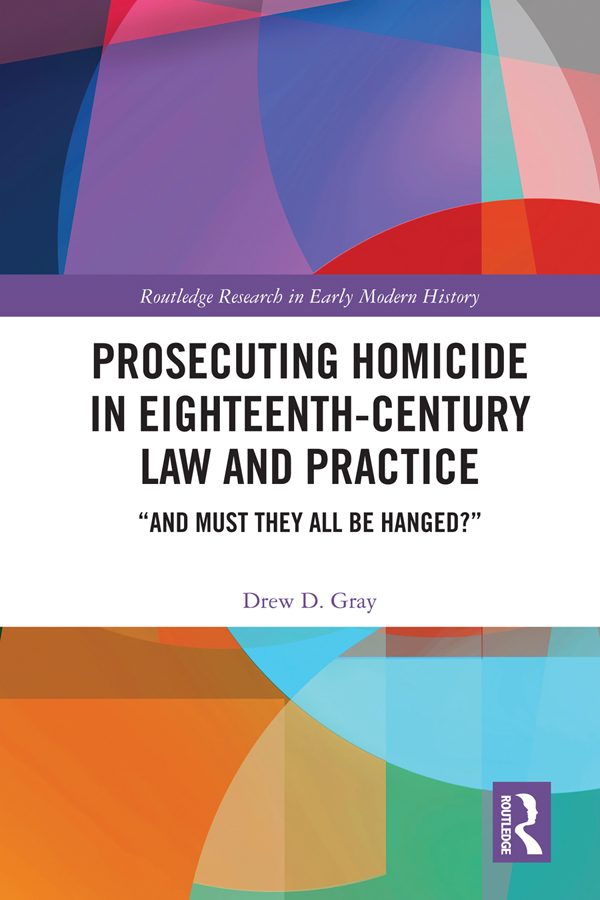 Routledge has published a new book on homicide and the law in 18th century England.

This volume uses four case studies, all with strong London connections, to analyze homicide law and the pardoning process in eighteenth-century England. Each reveals evidence of how attempts were made to negotiate a path through the justice system to avoid conviction, and so avoid a sentence of hanging. This approach allows a deep examination of the workings of the justice system using social and cultural history methodologies. The cases explore wider areas of social and cultural history in the period, such as the role of policing agents, attitudes towards sexuality and prostitution, press reporting, and popular conceptions of "honorable" behavior. They also allow an engagement with what has been identified as the gradual erosion of individual agency within the law, and the concomitant rise of the state. Investigating the nature of the pardoning process shows how important it was to have "friends in high places," and also uncovers ways in which the legal system was susceptible to accusations of corruption. Readers will find an illuminating view of eighteenth-century London through a legal lens.

Drew D. Gray is the head of Humanities at the University of Northampton.

1. Introduction and Themes
2. "Mercy Without Justice"? Press Criticism of the Pardoning Process in Late Eighteenth-Century London: The Kennedy Case of 1770
3. "There Goes Clarke, That Blood-Selling Rascal": Murder, Revenge and the Crowd in Early 1770s Spitalfields
4. The Royal Duchess and the Apothecary’s Son: Homicide, Communal Prejudice and Pleading for Pardon in Provincial England
5. Sex, Scandal and Strangulation: The Strange Case of Francis Kotzwara and Susannah Hill
6. Conclusions