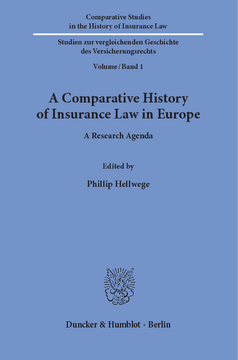 
Phillip Hellwege is Professor of Private Law, Commercial Law, and Legal History at the University of Augsburg, Germany. Before taking up his position in Augsburg he was from 2003 to 2010 a Senior Research Fellow at the Max Planck Institute for Comparative and International Private Law in Hamburg. In 2015 he has been awarded a European Research Council (ERC) Consolidator Grant for a five-year project on a comparative history of insurance law in Europe. His research interests are (European) private law, comparative legal history and the history of commercial and insurance law.

(more information with the publisher)

Posted by Frederik Dhondt at 1:45 PM