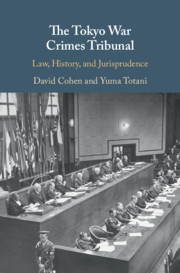 Cambridge University Press is publishing a new book on the Tokyo War Crimes Tribunal next month.

Like its Nuremberg counterpart, the Tokyo trial was foundational in the field of international law. However, up to now, the persistent notion of 'victor's justice' in the existing historical literature has made it difficult to treat it as such. David Cohen and Yuma Totani seek to redress this by cutting through persistent orthodoxies and ideologies that have plagued the trial. Instead they present it simply as a judicial process, and in so doing reveal its enduring importance for international jurisprudence. A wide range of primary sources are considered, including court transcripts, court exhibits, the majority judgment, and five separate concurring and dissenting opinions. The authors also provide comparative analysis of the Allied trials at Nuremberg, resulting in a comprehensive and empirically grounded study of the trial. The Tokyo tribunal was a watershed moment in the history of the Asia-Pacific region. This ground breaking study reveals it is of continuing relevance today.

David Cohen directs the WSD Handa Center for Human Rights and International Justice at Stanford University. Previously Cohen was at the War Crimes Studies Center at the University of California, Berkeley, where he taught for thirty-five years before moving the Center to Stanford University in 2013. He publishes on international criminal law, transitional justice, human rights, classics, and comparative legal history, while also directing human rights, rule of law, and accountability projects in South and Southeast Asia and Africa.
Yuma Totani, University of Hawaii

Yuma Totani is a historian of modern Japan and presently teaches at the University of Hawaii. Her research interests are in World War II and war crimes trials in Asia and the Pacific. She is the author of The Tokyo War Crimes Trial (2008) and Justice in Asia and the Pacific Region, 1945–1952 (Cambridge, 2015). She has received various fellowships, including a National Fellowship from the Hoover Institution (2016), the Frederick Burkhardt Residential Fellowship (2012), and the Abe Fellowship (2011).