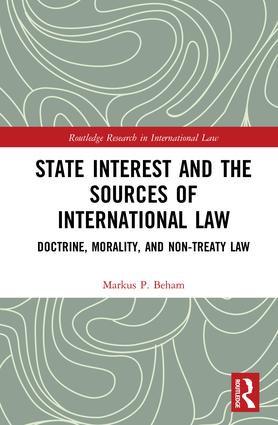 
This book addresses the disparity between positive non-treaty law and its scholarly assessment in the area of moral concepts, understood as altruistic as opposed to reciprocal legal obligations. It shows how scholars are generously willing to assert the existence of a rule of international law, thereby moving further away from actual state practice, not taking into account the factors of legal rhetoric and the core survival interests of the state in the formation of custom and general principles of law. The main argument is that such moral concepts can simply not manifest themselves as non-treaty sources of international law from a dogmatic perspective. The reason is the inherent connection between the formation of the non-treaty sources of international law and state interest that makes it difficult, if not impossible, to assess state practice or opinio juris in the case of altruistic obligations. The book further demonstrates this finding by looking at two cases in point: Human rights and humanitarian exceptions to the prohibition of force. As opposed to the majority of existing works on the subject, State Interest and the Sources of International Law takes a bigger-picture approach to a number of distinct problems in international law scholarship by looking at the building blocks of international relations on the one hand, and merging this with sources doctrine on the other. It will be of interest to researchers, academics, and students in the fields of international law, human rights, international relations, political science, legal philosophy, and legal theory.


Foreword
Preface
Abbreviations
1 IntroductionA Do you Believe in International Law?1 The Quest for the Status Quo
2 Methodology as Added Value
3 Pending Added Value
4 Immediate Goals
5 The Factual
6 The Abstract
B What if I Told You…
1 External Perspectives
2 The International College of Legal Illusionists
3 The "Is" and the "Ought"
C Customary International Law and "Customary International Law"
1 Formation
2 Two "Is"
3 Ensuring Effectivity
4 The Downward Spiral
5 State Interest
6 Reciprocity
7 Moral Concepts
D Case Studies1 Human Rights
2 Use of Force
E Catch, Before the Fall1 Controversy and Apology
2 "Legality" and "Morality"
3 "Dogmatik", not "Pedantic'
2 Non-Treaty SourcesA On the "Sources" of International Law
1 Article 38 of the Statute of the International Court of Justice
2 Acceptance and Reception in the Literature
3 Two or Three "Main" Sources?
B Customary International Law
1 Law of a Primitive Society
2 Theories on Custom
3 State Practice
4 Opinio Iuris5 Paradoxes of the Two-Element Theory
6 Schrödinger's Custom
7 The Man on the Clapham Omnibus
8 Practice of the International Court of Justice
9. "Modern" Approaches to the Formation of Custom
10. Assessment
C General Principles of Law
1 Terminology
2 Identification
3 Excursus: "Civilized Nations"
4 Assessment
3 Morality and State InterestA Defining Morality and Legality
1 Morality
2 Legality
3 Two Planes
4 Moral Concepts
B State Interest
1 States
2 Interest
3 Interests of States
4 Assessment
4 Doctrine and IndeterminacyA Human Rights as Non-Treaty Law: Doctrine
1 Prelude: Human Rights and the United Nations
2 Human Rights as Customary International Law
3 Human Rights as General Principles of Law
4 Preliminary Conclusion
B Humanitarian Use of Force: Indeterminacy
1 Prohibition of the Threat or Use of Force
2 Non-intervention
3 Changing the Rules of Force
4 Humanitarian Intervention Theory
5 The "Responsibility to Protect"
6 Preliminary Conclusion
5 ConclusionBibliography


Markus P. Beham is an Assistant Professor at the Chair of Constitutional and Administrative Law, Public International Law, European, and International Economic Law at the University of Passau, Germany.


More information with the publisher.

Posted by Frederik Dhondt at 1:59 PM