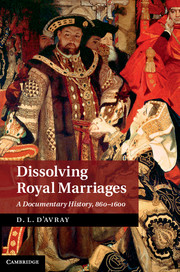 
Arguably, no other institution in the Middle Ages and early modern era was as subject to as many legal disparities and disputes between royal and papal power as that of royal marriage. In fact, a royal marriage was far from a private affair. On the spiritual level, the marriage of a royal couple was to reflect the sanctity of the life union between woman and man at the highest strata. Kings and queens were models of marital behaviour who, theoretically, were expected to match the idealistic gendered expectations and roles associated with their positions as husbands and wives. On the secular level, royal marriages symbolised an alliance between kingdoms. Marrying into the ‘wrong’ dynasty and choosing to dissolve one union in favour of another that offered more potential — like power, wealth or the birth of legitimate offspring and, thus, successors — had political ramifications that often reverberated far beyond the boundaries of the individual kingdoms involved. The culture of medieval and early modern Europe before the Reformation was unique as nowhere else in the world were the sexual lives and personal relationships of kings and queens, men and women, so policed by an external entity like the Catholic church. Thus, at its heart, royal marriage was a fundamental issue that defined ongoing relations between Church and State for a number of centuries.


The full text can be accessed on recensio.net.
More information on the book on the publisher's website.
Posted by Frederik Dhondt at 8:46 AM