JOURNAL: "A Special Issue of Frontiers: A Journal of Women’s Studies: The ERA in the 21st Century" 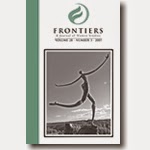 The failure of the Equal Rights Amendment links generations of feminists across nearly a century of activism.  In 1923, Alice Paul introduced the Equal Rights Amendment to Congress for the first time, demanding equality of rights under the law, regardless of sex. The amendment was introduced unsuccessfully to every Congress since 1923. Though it became a central rallying point for Second Wave feminism, passing both houses of Congress in 1972, it ultimately failed to receive enough state ratifications before its deadline in 1982. Despite its repeated failure the ERA has served as a symbolic torch carried by generations of feminists fighting for women’s rights.
The ERA serves as a conduit for critical dialogues about equal rights, because while the cultural, legal, political, and intellectual heritage of the United States is rooted in the “self-evident” precept of equality, it has prevented the ratification of the Equal Rights Amendment for 90 years.  Furthermore, the topic of the ERA sometimes alienates supporters of equal rights who criticize its complicity in marginalizing race, class, gender, and sexuality through its heteronormative focus on women’s rights. The subject of the ERA has also caused some intergenerational conflict. Some activist feminists who have been working on the ERA for decades—who were in the trenches when it failed in 1982—believe that they have a more true idea of the significance of the loss.  Other activist feminists see the amendment as less relevant today than ever before, and are ready to rally efforts in other spaces.  Academics are highly critical of the political, economic, and legal shortcomings of the past, of the failure to unite in the present, and of the ways that the rhetoric of women’s equality that is so tightly intertwined with the ERA is, in turn, marginalizing others (particularly in terms of its lack of connection to intersections of race, class, gender identity, and sexuality).
This Special Issue about The ERA in the 21st Century seeks to bring together an interdisciplinary array of scholars from such academic disciplines as women’s, gender, and sexuality studies, American studies, history, law, literature, and political science with practitioners from the legal and political professions and activists from grassroots organizations to discuss the proposed Equal Rights Amendment to the U.S. Constitution.

Proposals may explore past, present, and future implications of the fact that the ERA is still not in the Constitution, 90 years after it was first proposed in 1923, and consider how the ERA’s legacy in the 20th century positions the amendment in the popular, social, political, and legal consciousness of the 21st century. Using the ERA as a frame for dialogues across academic, legal, political, and public spheres, this call for papers especially encourages perspectives that engage with theories of, and/or experiences with intersectionality.
Some questions for consideration might include: How has the ERA served to bond feminists in a common struggle? Divide them? Why should the United States add an Equal Rights Amendment to the Constitution?  Is it needed to achieve equal rights without regard to sex?  Would it have any demonstrable negative cultural/legal impact?    What does the failure thus far to ratify the Equal Rights Amendment indicate about the relative cultural/political status and valuation of females in the U.S. since 1923? How have cultural and/or political relationships evolved since 1923 regarding the Equal Rights Amendment and feminism?  Men, both as individuals and as a class?  ERA supporters and opponents, past and present? How has the Equal Rights Amendment been related legally and politically to reproductive rights?  LGBTQ issues?  Trans issues? Racial equality? Economic policies?  Employment rights?  Traditional gender roles and conservative “family values”? What comparisons and contrasts can be drawn between the social and political movement for the Equal Rights Amendment and the movement for racial justice/civil rights?  For reproductive rights?  For LGBTQ rights?  What do these movements have to learn from each other?   In what ways do people continue to engage with the Equal Rights Amendment in academia?  Legal and political practice?  Grassroots advocacy?  What models exist or can be formulated for bridging these categories of engagement?
An inter- and multidisciplinary journal, Frontiers welcomes submissions of scholarly papers, activist essays as well as creative works such as artwork, fiction, and poetry.  Works must be original and not published or under consideration for publication elsewhere.  All special issue submissions and questions should be directed to frontiers@osu.edu.  For submission guidelines, please consult the Ohio State University Frontiers websites: http://frontiers.osu.edu/submissions
Frontiers: A Journal of Women’s Studies
Department of Women's, Gender, and Sexuality Studies
The Ohio State University
286 University Hall
230 North Oval Mall
Columbus, OH 43210-1367
frontiers@osu.edu
Posted by Unknown at 7:25 PM