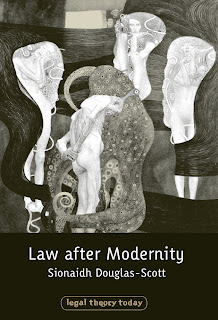 
Read the editor's abstract:
"How can we characterise law and legal theory in the twenty-first century? Law After Modernity argues that we live in an age 'after Modernity' and that legal theory must take account of this fact. The book presents a dynamic analysis of law, which focusses on the richness and pluralism of law, on its historical embeddedness, its cultural contingencies, as well as acknowledging contemporary law's global and transnational dimensions.

However, Law After Modernity also warns that the complexity, fragmentation, pluralism and globalisation of contemporary law may all too easily perpetuate injustice. In this respect, the book departs from many postmodern and pluralist accounts of law. Indeed, it asserts that the quest for justice becomes a crucial issue for law in the era of legal pluralism, and it investigates how it may be achieved.

The approach is fresh, contextual and interdisciplinary, and, unusually for a legal theory work, is illustrated throughout with works of art and visual representations, which serve to re-enforce the messages of the book".