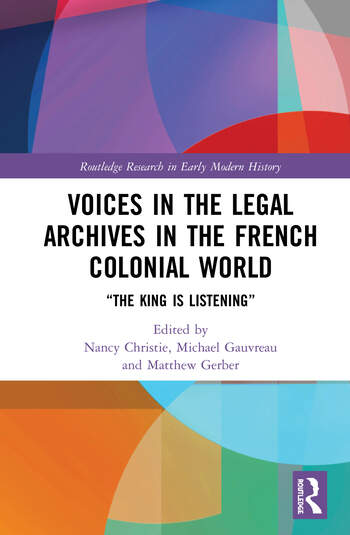 Routledge is publishing an edited collection on judicial practices and litigation during the first era of French overseas expansion.

Voices in the Legal Archives in the French Colonial World: "The King is Listening" offers, through the contribution of thirteen original chapters, a sustained analysis of judicial practices and litigation during the first era of French overseas expansion.

The overall goal of this volume is to elaborate a more sophisticated "social history of colonialism" by focusing largely on the eighteenth century, extending roughly from 1700 until the conclusion of the Age of Revolutions in the 1830s. By critically examining legal practices and litigation in the French colonial world, in both its Atlantic and Oceanic extensions, this volume of essays has sought to interrogate the naturalized equation between law and empire, an idea premised on the idea of law as a set of doctrines and codified procedures originating in the metropolis and then transmitted to the colonies. This book advances new approaches and methods in writing a history of the French empire, one which views state authority as more unstable and contested. Voices in the Legal Archives proposes to remedy the under-theorized state of France’s first colonial empire, as opposed to its post-1830 imperial expressions empire, which have garnered far more scholarly attention.

This book will appeal to scholars of French history and the comparative history of European empires and colonialism.

Part I: Reading Colonial Legal Records Against the Grain  1. Controlling Haitian History: The Legal Archive of Moreau de Saint-Méry  2. Proof of Freedom, Proof of Enslavement: The Limits of Documentation in Colonial Saint-Domingue  Part II: Between Metropole and Periphery  3. Silencing Madmen: The Legal Process of Interdiction, Saint-Domingue, Eighteenth Century  4. The Treatment of Domestic Servants in Canada’s Justice System Under the French Regime: A Conciliatory Approach?  5. Contesting the Seigneurial Corvée: Two Generations of Peasant Litigation in Eighteenth-Century Angoumois  Part III: Chains of Property and Obligation  6. Between Property and Person: The Ambiguous Status of Slaves in Eighteenth-Century Martinique, Guadeloupe and Saint-Domingue  7. Trust, Obligation, and the Racialized Credit Market in Pre-Revolutionary Cap Français  8. The Inhabitants "Appear Are Not Such Fools as a Menny Thinks": Credit, Debt, and Peasant Litigation in Post-Conquest Quebec  Part IV: Circuits of Power and the Testimony of the Marginal  9. The Voice of the Litigant, the Voice of the Spokesman?: The Role of Interpreters in Trials in Canada under the French Regime (17th and 18th Centuries)  10. Voices of Litigating Women in New France During the 17th and 18th Centuries: Elements of Research on the Judicial Culture of the Appellants in the Archives of the Royal Jurisdiction of Montreal (1693–1760)  11. Slaves as Witnesses, Slaves as Evidence: French and British Prosecution of the Slave Trade in the Indian Ocean  Part V: Divided Sovereignties, Legal Hybridities  12. When French Islands Became British: Law, Property, and Inheritance in the Ceded Islands  13. Contested Spaces of Law and Economy: Legal Hybridity and the Marital Economy Within Quebec’s Merchant Communities