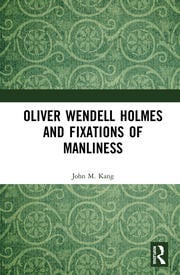 Oliver Wendell Holmes, Jr. has been, and continues to be, praised as America’s greatest judge and he is widely considered to have done more than anyone else to breathe life into the Constitution’s right of free speech, probably the most crucial right for democracy. One indeed finds among professors of constitutional law and federal judges the widespread belief that the scope of the First Amendment owes much of its incredible expansion over the last sixty years to Holmes’s judicial dissents in Abrams and Gitlow.

In this book, John M. Kang offers the novel thesis that Holmes’s dissenting opinions in Abrams and Gitlow drew in part from a normative worldview structured by an idiosyncratic manliness, a manliness which was itself rooted in physical courage. In making this argument, Kang seeks to show how Holmes’s justification for the right of speech was a bid to proffer a philosophical commentary about the demands of democracy.

John M. Kang is Professor of Law at St Thomas University, USA. He has published on constitutional law and masculinity.

Chapter One: The Father and the Hero

Chapter Three: Reasons for Fighting in the War

Chapter Four: The Experience of War: "A Splendid Carelessness for Life"