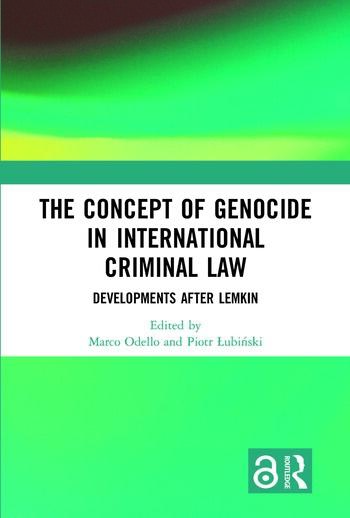 Routledge is publishing a new book on the history of the concept of genocide.

This book presents a review of historical and emerging legal issues that concern the interpretation of the international crime of genocide.

The Polish legal expert Raphael Lemkin formulated the concept of genocide during the Nazi occupation of Europe, and it was then incorporated into the 1948 Convention on the Prevention and Punishment of the Crime of Genocide. This volume looks at the issues that are raised both by the existing international law deﬁnition of genocide and by the possible developments that continue to emerge under international criminal law. The authors consider how the concept of genocide might be used in different contexts, and see whether the deﬁnition in the 1948 convention may need some revision, also in the light of the original ideas that were expressed by Lemkin. The book focuses on speciﬁc themes that allow the reader to understand some of the problems related to the legal deﬁnition of genocide, in the context of historical and recent developments.

As a valuable contribution to the debate on the signiﬁcance, meaning and application of the crime of genocide the book will be essential reading for students and academics working in the areas of Legal History, International Criminal Law, Human Rights, and Genocide Studies.

PART I Theoretical and Historical Framework