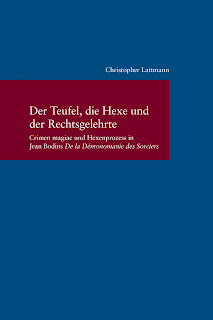 Jean Bodin is known above all as the author of the Six livres de la République (1576) and the founder of the theory of sovereignty. Most modern readers, however, are less familiar with his demonology of 1580, which was also a bestseller at the time – not least because witchcraft law was hardly standardised in early modern France. In De la Démonomanie des Sorciers (1580), Bodin discussed the nature of witchcraft and gave instructions for the strict legal prosecution of the crimen magiae. Christopher Lattmann’s study is the first to provide a detailed examination of this controversial legal work from the perspective of legal history. Bodin understood witchcraft as a phenomenon that resulted from the interaction of God, devil and man. His view of the world is reflected in his material witchcraft law, above all in his treatment of the various witchcraft offences: from entering into a pact with the devil to participating in the Witches’ Sabbath or using maleficent magic. Lattmann demonstrates the influences of Mosaic, Roman and ecclesiastical law as well as of contemporary demonology on Bodin’s work. Against the background of French criminal procedural law, he shows that Bodin established a special summary procedure for witch trials that differed from the regular inquisition procedure. Since Bodin could not base himself on any existing French law for this purpose, he drew on the doctrines of foreign criminal jurists. Lattmann thus shows how Bodin’s work originated in a European legal sphere and became an important contribution to European criminal law in the 16th century.