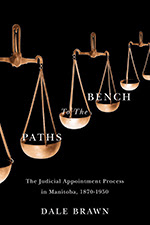 A lawyer wanting to become a judge in early 20th-century Manitoba could attract the attention of his peers through his work -- but it was a friendship with a powerful mentor that got him to the bench. In Paths to the Bench, Dale Brawn looks at the appointments and careers of early judges who were charged with laying the legal foundations of a province. With much at stake, judicial appointments were as much about personal ties and politics as they were about ability. Beliefs were scrutinized to ensure that they would not impede the province’s, and the nation’s, growth, while ongoing mentorships ensured that these beliefs were cultivated through shared kinship groups. By looking at both official records and correspondence from this era, Brawn uncovers the highly political nature of the judicial appointment process and the intricate bonds that ensured that judges acquired the values not of their society, but of their fellowship groups. His in-depth analysis also examines the distinct career trajectories of less competent and more competent lawyers and considers why many of the best and brightest members of the bar did not go to the bench.
A fascinating look at the careers of practical, hard-headed, and extraordinarily influential judges, Paths to the Bench is also an incisive study of the political nature of Canada’s judicial appointment process
Posted by Unknown at 1:37 PM