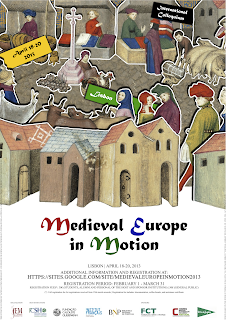 What: International Colloquium “Medieval Europe in motion”
Where: Lisbon
When: 18-20 April 2013

The International Colloquium “Medieval Europe in motion” is directly linked to the current postdoctoral research projects of Dr. Maria Alessandra Bilotta on «Portuguese juridical manuscripts production and illumination between 14th and 15th centuries and theirs connections with manuscripts production and illumination in the French “Midi” (specially Toulouse, Avignon and Montpellier) and in the North-Mediterranean regions (Italy and Cataluña)» and by Alicia Miguélez on «The gesture language in the Lorvão Apocalypse and its rapports with other beatus manuscripts».

It is also related to other on-­going investigations on cultural and artistic circulation during the Middle Ages carried out by the Research Group <Medieval Texts and Images>, coordinated by Prof. Maria Adelaide Miranda at the Institute for Medieval Studies of the Nova University (Lisbon)
The main objective of this initiative is to analyze the influence of circulation, motion and mobility of people, forms and ideas on the artistic creation during the Middle Ages. This is not a completely new topic in the field of Medieval Art Studies as several scientific events have already been organized in the past years on this topic. This Colloquium aims thus to conduct a critical and constructive revision of these matters, proposing new questions to be discussed.

For more information, visit the conference website and the facebook profile.
Posted by Dr. Stefania Gialdroni at 10:33 AM