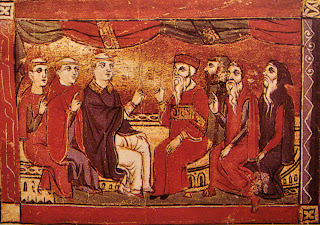 The Maison des Sciences de l’Homme Ange Guépin (MSH, Nantes, France) is recruiting post-doctoral researchers for work on the project “RELMIN: The legal status of religious minorities in the Euro-Mediterranean world (5th-16th centuries)”. RELMIN is based at the MSH and is directed by John Tolan, professor of history at the University of Nantes. It is funded for five years (2010-2015) as part of the Ideas programme of the European Research Council’s Seventh Framework Programme.
Deadline: May 1st 2013

Project summary
European religious diversity has its roots in the practice of medieval societies. Medieval European polities, Christian and Muslim, granted protected and inferior status to selected religious minorities. RELMIN collects, publishes and studies legal texts defining the status of religious minorities in pre-modern Europe. The corpus of texts includes Roman law (in particular in the legal codes of Theodosius and Justinian), canon law (acta of Church councils, the Decretum attributed to Gratian, the Decretales), national or royal law (from “barbarian” law codes of the early Middle Ages to national compilations such as the Siete Partidas of Alfonso X of Castile in the thirteenth century), urban law (particularly the fueros in the Iberian peninsula and hisba manuals in Andalusia), rabbinical responsa, and fatwa collections. The database will contain texts in their original languages and translations into English and French, as well as an annotated bibliography on the subject. This will become a major reference tool for research in the history of minority law and of interreligious relations. Candidates should consult and familiarize themselves with the pilot edition of the database: http://www.cn-telma.fr/relmin/index/?langue=eng

The project also holds semi-annual workshops and is planning a major international conference on Religious diversity in pre-modern Europe. A series of comparative thematic studies on specific aspects of interreligious relations will allow us to compare responses to similar issues in diverse societies, from seventh-century Córdoba to fifteenth-century Krakow. The goal is to encourage collaborative interdisciplinary work by scholars from different countries with varying linguistic skills, to encourage new innovative research that cuts across traditional divides. The project will publish major works in the field: the proceedings of the various conferences and workshops, a sourcebook of selected legal texts (with translations, commentaries and annotated bibliography), and a monograph on the legal status of minorities in pre-modern Europe.

Qualifications
Applications are accepted at two levels: doctoral and postdoctoral. Doctoral candidates should be currently enrolled in a doctoral program; their thesis subjects should be related to the themes of RELMIN. Each postdoctoral candidate should have a recent PhD in history, law, language, religion or literature, with a specialisation related to the themes of RELMIN. She or he should have a high level of competence in several medieval languages and should have experience editing documents in at least one of the languages. We welcome applicants of all nationalities. Since the project’s working languages are English and French, researchers should be conversant in both (or at least in one, with some comprehension of the second).

Responsibilities of the researchers
Doctoral and post-doctoral researchers will be part of a research team based inNantes. Their primary responsibilities will be editing the project database and participating in the organization of the semi-annual workshops. Each researcher will be given a specific thematic area corresponding to his/her particular expertise. In this area his/her tasks will include:

Conditions of employment
Each of the researchers will be hired on a non-renewable contract (French CDD: contrat à durée déterminée). The date of the beginning of the contract will be negotiated on hiring: it will be no earlier than September 1st 2013 and no later than April 1st 2014. Each researcher will be expected to reside in Nantes for the period of employment and will be provided with office space at the MSH.
Three types of positions may be open:

Application procedures
Applicants should send an application, consisting of a letter of application, a clearly-presented list of sources that they propose to work on for RELMIN, a curriculum vitae, and three letters of reference. In the application letter, the candidate should indicate preferred periods of employment. All documents should be sent in PDF format to relmin@univ-nantes.fr by May 1st, 2013.