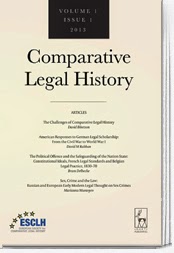 Subscription information is available here. As the official ESCLH publication, its members receive a free subscription.

The articles in this issue include:

This paper examines the evidence for the development of a law of contract during the period of the Warring States (481-771 BCE) and the Qin/Han dynasties (221 BCE – 220 CE). From a study of the technical terms found in the context of agreements, in particular zhai (debt), yue (agreement), and quan (document in two parts), the conclusion is drawn that early Chinese law never developed beyond the stage of recognition of a number of distinct types of agreement to which legal consequences were attached. No ‘law of contract’, comparable to that developed in Rome at roughly the same epoch, emerged from these particularities. The main reason for the difference between Rome and China, it is suggested, lay in the lack of emergence in China of a class of private lawyer resembling the Roman jurists.

Marcel Senn -  ‘Law and Authority’: A Political and Legal Paradigm by Thomas Hobbes and its Different Receptions in the USA, Canada, Britain and Germany since 1989

Thomas Hobbes’ Leviathan is one of the few grand oeuvres representing the code of pre-modern political power. This code often legitimates our present understanding of law and state. Therefore it is necessary to discover the ‘socialisation’ of the interpreters – that is the impact of social, cognitive interests within scientific interpretations of law – so as to improve our understanding in a more differentiated way. The author demonstrates this in relation to three different discourses on Leviathan conducted in North America, Britain and Germany during the last twenty-five years. He thereby shows how the ‘socialisation’ of the interpreters is manifest in these particular discourses, and what this means to a reader’s critical comprehension when he or she tries to understand an opus such as Leviathan by merely reading secondary literature.

This paper tracks the evolution of the codification of commercial law and company law, also known as business law. Although the literature on codification in general is vast, little attention has been dedicated to the importance of business law in this context despite the first major moves towards codification being achieved in this field. A comparative and historical survey of the codification of business law in France, England and Germany illustrates how the European legal landscape has been affected by the process of casting the law in statutory form. Indeed, regardless of the commonly-held misconception that there is ‘a’ commercial code, the legislative responses to the needs of commerce have varied widely from country to country, for while company law was always in focus, the rest of the corpus differs substantially. The code de commerce of 1807 was primarily of a procedural nature, while the German commercial code of 1863 created its own ‘private law cosmos’ and the late English codes adopted yet another, very selective, strategy. The aim of this comparative study is to understand the foundations of the legal institutions of the nineteenth century which still form the basis of our current statutes. This in turn allows some predictions for likely future developments to be made.

The Reviews, including a Review Article, include: