BOOK: Justin Steinberg, "Dante and the Limits of the Law" 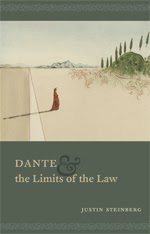 Justin Steinberg
"Dante and the Limits of the Law"


In Dante and the Limits of the Law, Justin Steinberg offers the first comprehensive study of the legal structure crucial to Dante’s Divine Comedy. Steinberg reveals how Dante imagines an afterlife dominated by elaborate laws, hierarchical jurisdictions, and rationalized punishments and rewards. Steinberg makes the compelling case that Dante deliberately exploits this highly-structured legal system to explore the phenomenon of exceptions to it, introducing Dante to crucial current debates about literature’s relation to law, exceptionality, and sovereignty.
Examining how Dante probes the limits of the law in this juridical otherworld, Steinberg argues that exceptions were vital to the medieval legal order and that Dante’s otherworld represents an ideal “system of exception.” Yet Dante saw this system as threatened on earth by the dual crises of church and Empire—the abuses and overreaching of the popes and the absence of an effective Holy Roman Emperor. In his imagination of the afterlife, Steinberg shows, Dante seeks to address this gap between the universal validity of Roman law and the lack of a sovereign power to enforce it. Exploring the institutional role of disgrace, the entwined phenomena of judicial discretion and artistic freedom, medieval ideas about privilege and immunity, and the place of judgment in the poem, this is an elegantly argued book that persuasively brings to life Dante’s sense of justice.

Email ThisBlogThis!Share to TwitterShare to FacebookShare to Pinterest
Labels: Dante, Law and Humanities, Law and Literature, Law and Society, Literature and Literary criticism