BOOK: Special Offer for Members of the ESCLH! 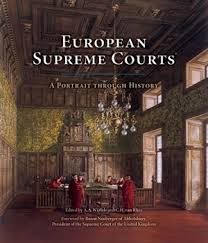 European Supreme Courts: A Portrait through History is a beautifully illustrated hardback book, written by a team of leading legal historians drawn from faculties across Europe and beyond. The book explores in a lively and accessible style the history of supreme courts structures throughout the European continent from the high medieval period to the modern day. The story is one of considerable diversity, but it also reveals many common themes which influenced the practice of law at the highest level in different times and places. To an extent which may surprise many readers, supreme courts in Europe, particularly in the pre-Napoleonic era, grappled with many of the problems of multifarious nationalities, languages, traditions and jurisdictions which are familiar challenges for lawyers working within the international and European courts we know today. Indeed, the book serves to set the contemporary role of the international and European courts within the context of a strikingly rich legacy of legal traditions, culture and history in Europe. The authoritative text is accompanied by over 160 images from archives and collections across Europe, as well as present-day images of European and national supreme courts. Many of these images are little known other than to specialists in their countries of origin, and are presented to the general European reader for the first time.
European Supreme Courts: A Portrait through History is designed to be read by legal professionals, officials, academics and law students alike, as well as the general reader with an interest in the history of the European judicature. The ambitious scope of this publication in terms of its historical coverage, geographical range and illustrative content has not previously been attempted in the field of legal history publishing. This is a ground-breaking and beautifully presented publication which discerning lawyers who are interested in the history of their profession will wish to own.

The first part of the book examines supreme courts by political and geographical jurisdiction from the medieval period to the modern day. The French revolutionary and Napoleonic era marked a watershed in the history of European supreme courts, and led to the rise of nationalism and the nation-state from the beginning of the 19th century. The second part of the book examines these developments in the context of the emergence and continuing growth of European courts, notably the European Court of Human Rights in Strasbourg and the Court of Justice of the European Union in Luxembourg.
Readers can order a copy of European Supreme Courts: A Portrait through History at www.european-supreme-courtsbook.com. The publishers are pleased to offer for a limited period a 25% discount on the full price to members of the European Society for Comparative Legal History. To draw down this discount, please add a copy of the book to the shop basket and then click ‘view basket’. On this second screen enter the code EC25 in the box titled ‘Promotion Code’ and click the update button.
Title:
The European Supreme Courts. A Portrait through History
Pages: 288Price: £ 49.95 (excl. P&P)
Hardcover, 160 illustrations
www.european-supreme-courts-book.com