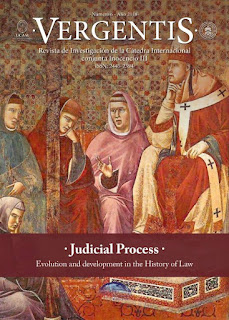 Vergentis is a scientific initiative of the International Chair Innocent III of the Catholic University of Murcia and of the Institutum Utriusque Iuris of the Pontifical Lateran University for the research in History of Law, ius commune and Canon law.
The Journal, in its six-monthly editions, comes both in paper and digital format (the digital version is freely accessible, with no restriction, in open access modality) and it collects scientific articles that are submitted to two specialists in the subject, following the process of the double-blind peer review.
In addition to this, Vergentis is in charge of the paper and digital publication of the proceedings of the International Conference that the International Chair Innocent III holds every year in the Catholic University of Murcia, in the presence of the great personalities of the academic world; the Conference represents an opportunity to make a reflection and a debate regarding the History of Law, Canon Law and the related subjects, without forgetting the dialogue with the Positive Jurist and always considering the signs of times.
The international standing of the Journal, acknowledged as a forum of reflection, novelty and interdisciplinary university research, is regarded favourably and it is supported by more than 200 Historians of Law, Jurists and Canonists of the World, who compose the Scientific council of Referee and the Editorial Board.
Vergentis is regularly published in the catalogues of hundreds of libraries of the world and in the main databases of scientific journals such as Erih Plus - of the European Science Foundation-, DOAJ, WorldCat, OpenAire, Dialnet, MIAR and many others.

The most recent issue, focusing on 'The judicial process', is available now.