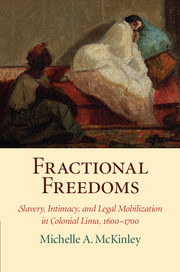 H-Law posted a book review by Lyman Johnson (University of North Caroline at Charlotte) on the work Fractional Freedoms: Slavery, Intimacy, and Legal Mobilization in Colonial Lima, 1600-1700, published by Cambridge University Press in 2016.


The historical examination of slavery in colonial Spanish America has undergone a revolutionary transformation during the last thirty years. Early histories that focused narrowly on Spanish colonies in the tropical plantation zone have been supplemented by a wave of new research that makes clear that the Atlantic slave trade distributed slaves into nearly every corner of Spain’s American empire and into nearly every sector of the colonial economy. Each new generation of scholars has extended the field into new regions and new periods while exploring new archives and methods. In this progression, historians have also successfully adapted the tools of ethnohistory, gender studies, and economics to the exploration of this ubiquitous and foundational Spanish American institution.

Read further on H-Law.
Posted by Frederik Dhondt at 9:31 AM