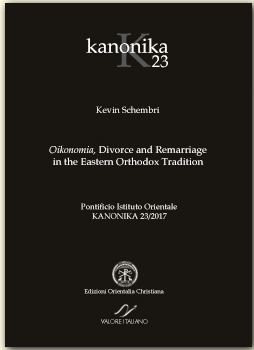 About the book:
How do the Eastern Orthodox Churches understand the mystery of marriage? On what grounds do these Churches concede ecclesiastical divorce and tolerate a new marriage? What is oikonomia and how is it invoked in the Orthodox East? Over the last decades, these questions were the subject of numerous studies. With a foreword by Cardinal Francesco Coccopalmerio, this volume builds on this research and attempts to offer a comprehensive systematic answer to these questions. By doing so, it adds to the already rich tradition of the Eastern Orthodox Churches, and presents the Western Churches with a valuable resource in their pursuit of ecumenical dialogue, in their dealing with the ever-growing reality of mixed marriages, and in their ministry to the divorced and remarried members of their faithful. Published as volume 23 in the Series Kanonika, this study forms part of the various projects launched by the Pontifical Oriental Institute during its centenary celebrations.

About the author:
Kevin Schembri is a lecturer in canon law at the Faculty of Theology of the University of Malta. He holds a licentiate in sacred theology from the same university and a doctorate in canon law (with specialisation in canonical jurisprudence) from the Pontifical Gregorian University in Rome. He is a Catholic priest and serves as promoter of justice and defender of the bond for the Archdiocese of Malta.