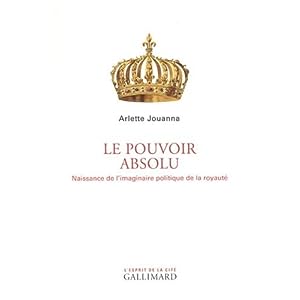 Arlette Jouanna (Univ. Montpellier III), expert on the French Wars of Religion, published Le Pouvoir absolu: Naissance de l'imaginaire politique de la royauté ([L'esprit de la cité] Paris: Gallimard, 448 p.). The books deals with the tension between internal order (power) and royal legitimacy (justice). She argues that the possibility for the monarch to be legibus solutus and thus transgress laws binding upon all legal subjects, should be seen as an exception. Before the Wars of Religion (1562-1598, from Charles IX to Henry IV), rulers in France were bound by the law. Derogations were only exceptionally allowed, in cases of necessity. Moreover, even in those cases, the sovereign remained under the Empire of God and Reason. However, the break-up of the unity between the civitas Dei and secular society turned the King into the sole point of converging consensus amongst the confessions in France. The French way of constructing royal sovereignty was thus characterized by a total breach of the medieval intertwining of God and secular power. The "new prince" had a direct link or proximity with God, conferring a superior legitimacy to his will.