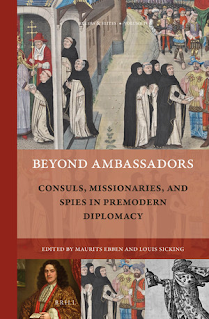 ABOUT THE BOOK
Series: Rulers & Elites, Volume: 19. Contributors are: Maurits Ebben, Dante Fedele, Alan Marshall, Jacques Paviot, Felicia Roșu, Jean-Baptiste Santamaria, Louis Sicking, and John Watkins.
Because of the overarching shadow of ‘the state’ in all things diplomatic, traditional diplomatic history has neglected the study of any actors in foreign relations other than state diplomats, such as ambassadors. This volume focuses on the question of how and why consuls, missionaries, and spies not formally tied to the state or a prince could play a role in premodern diplomatic relations. It highlights their multiple loyalties, their volatility, and the porous boundaries of diplomatic activity. Historical research on non-state actors – in the context of the so-called new diplomatic history – is all the more urgent as it demonstrates their undeniably significant contributions to the formation of Europe’s international relations.
ABOUT THE EDITORS
Maurits Ebben (1955) is a lecturer at Leiden University, Ph.D. Leiden University 1996. He is currently working on a new volume entitled Ambassadors, Consuls and Commerce: The Dutch Diplomatic Service in the Later Seventeenth Century, 1648-1700.
Louis Sicking is the Aemilius Papinianus professor of history of public international law at VU University and lecturer in history at the University of Leiden. He is presently working on a book on conflict management in pre-modern Atlantic Europe.
TABLE OF CONTENTS
List of Maps and Table
Notes on Contributors
Introduction
Maurits Ebben and Louis Sicking
Part I
Theoretical Challenges
1. Premodern Non-State Agency: the Theoretical, Historical, and Legal Challenge
John Watkins
2. Plurality of Diplomatic Agents in Premodern Literature on the Ambassador
Dante Fedele
Part II
Consuls
3. Space, Agency, and Conflict Management in the Late Medieval Baltic: Urban Colonies and Representatives of Hanse Towns at Scania
Louis Sicking
4. Your High and Mighty Lordships’ Most Humble Servants: Dutch Consuls and the States General’s Diplomacy in Spain, 1648–1661
Maurits Ebben
Part 3
Missionaries
5. The Mendicant Friars: Actors in Diplomatic Encounters with the Mongols
Jacques Paviot
6. The New Indies, the Desired Indies: Antonio Possevino and the Jesuits between Diplomacy and Missionarism in Northeastern Europe, 1577–1587
Felicia Roșu
Part IV
Spies
7. Secrets, Diplomatics, and Spies in Late Medieval France and in the Burgundian State: Parallel Practices and Undercover Operations
Jean-Baptiste Santamaria
8. ‘Secret Wheeles’: Clandestine Information, Espionage, and European Intelligence
Alan Marshall
Index of Names
More information with the publisher.
Posted by Stefano Cattelan at 10:30 AM