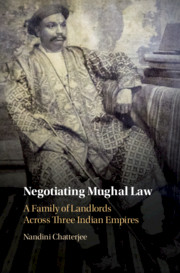 Based on a completely reconstructed archive of Persian, Hindi and Marathi documents, Nandini Chatterjee provides a unique micro-history of a family of landlords in Malwa, central India, who flourished in the region from at least the sixteenth until the twentieth century. By exploring their daily interactions with imperial elites as well as villagers and marauders, Chatterjee offers a new history from below of the Mughal Empire, far from the glittering courts of the emperors and nobles, but still dramatic and filled with colourful personalities. From this perspective, we see war, violence, betrayal, enterprise, romance and disappointment, but we also see a quest for law, justice, rights and righteousness. A rare story of Islamic law in a predominantly non-Muslim society, this is also an exploration of the peripheral regions of the Maratha empire and a neglected princely state under British colonial rule. This title is also available as Open Access.

Nandini Chatterjee is Associate Professor of History at the University of Exeter. She has published widely on the British and Mughal empires, including her book The Making of Indian Secularism: Empire, Law and Christianity, 1830–1950 (2011).