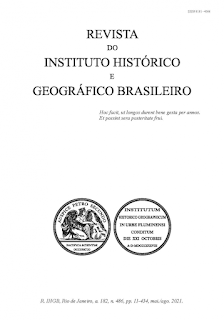 The paper aims to discuss the scenario of diamond exploitation and the administrative order issued to the territory of Serro Frio district in the captaincy of Minas Gerais between 1734 and 1739. In short, the protection and special defense of the district were gradually established after diamonds had been found at the headwaters of the Jequitinhonha River. Territorial expansion and economic demands led to processes of space changes and, and as a result of such changes, political and administrative measures were implemented for the exploitation of diamonds, with the aim of getting closer to the particularities of this mining area. We aim to show how the territory was redefined and how its importance evolved in the period, pointing out the developments that brought about a new scenario, as mining became a consolidated activity in the region.

has a long eighteenth century as its chronological frame, and, more specifically, the period from the mid to the end of the 18th century. It refers to the possible relationship between projects and reformist practices, on the one hand, and the set of ideas under the label of Enlightenment, on the other. In the Portuguese case, the reign of D. José I is generally presented as a decisive stage of the enlightened reforms. The period is viewed more in terms of rupture than of continuity, theformer bringing with it signs of “modernity” of the Enlightenment. From the perspective of the Atlantic world and, in particular, of the Portuguese Atlantic world, we discuss in the paper the relationship that is sometimes hastily made between eighteenth-century reforms andthe Enlightenment, especially those attributed to the Secretary of State Sebastião José de Carvalho and Melo, and the limits of the reforms.

The article provides a critical analysis of José Luís Almeida Nogueira’s work entitled A Academia de São Paulo: tradições e reminiscências, estudantes, estudantões, estudantadas, whose first edition was published in 9 volumes between 1907-12. The analysis traces back how the book was produced, the motivations of the author for writing it, examines its structure and raises further relevant questions. Our aim is to scrutinize if the book is a safe historical source for researchers on legal education in imperial Brazil, since it is commonly used in studies in the History of Law. We conclude that it is an important book for the history of the city of São Paulo and the São Paulo Law School as well as for the history of Brazilian politics and law. Bu it should be used with caution, as it presents the following problems: its sources and methodology are not always clear; it is difficult to check the veracity of facts; it focus only on figures close to the author and on “great names” of the Brazilian law; it lacks systematization; and, since it is an unfinished book, it presents gaps to be filled.

In addition to widely known factors, the creation of Labor Justice Courts in the Vargas regime resulted from negotiations between bureaucrats from the National Labor Council (CNT) and legal experts who guarded the boundaries of the judiciary. The article draws on documentatio from the CNT and the Supreme Court to identify three phases of conversion of the administrative body into a judicial one. We conclude that, in the process of institutional adjustment, political survival strategies were associated with normative parameters of justice stemming from a common legal culture. The socialization of law led to an expansion of the power of interpretation of the judiciary. In the world of law and judiciary, corporatism received contours linked less to class representation and more to access to justice and state control of the workers’ demands.

More information: https://www.ihgb.org.br/revista-eletronica/artigos-do-rihgb-486
Posted by Arthur Barretto at 9:00 AM